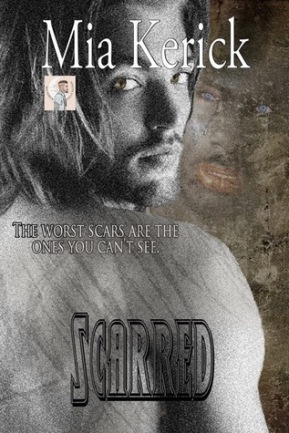 From bestselling author Mia Kerick comes a New Adult novel of Gay Romantic Suspense that will keep you up reading all night!

Matthew North waited ten years to heal from the devastating wounds inflicted by the man who abducted and abused him as a child. Living reclusively on a tropical island—with no company but his four cats—he merely avoids the lingering pain.

Wearing twisted ropes of mutilated skin on his back, Matt struggles with a profound hindrance—the scars that deaden his soul. However, on the night he meets lively Vedie Wilson, a local restaurant busboy who expresses his gender by wearing lipgloss and eyeliner along with his three-day beard, things change.

Gradually, Vedie and Matthew unite in friendship. Through a series of awkward encounters, the pair learns each other’s secrets. Vedie learns that an angelic face can front for a scarred soul. Matthew learns that the line between one’s masculine and feminine sides is blurred. Can they embrace the painful stories behind each other’s scars if they’re to find everlasting love? Or will surrendered love come to be yet another blemish on their souls?

This story was powerful and painful, there were times when I had to put it down and take a few breaths. It was shocking and there were times it made my angry but above all it was hope and love. (sounds crazy, but that’s what Mia Kerick made me feel!) I loved the connection Matt and Vedie found together, something that goes beyond the pain and fear and even deeper than just acceptance. These are two beautiful souls who deserve to find happiness.

This book hit all the emotional buttons for me. From the very beginning I felt engulfed by all of it. The characters are so beautiful. Matt and Vedie have a past. Their past is the equivalent of many of our nightmares. It’s hard to put it into words and I don’t want to spoil anything about it.
Separate these characters are stunning but together they shine.

What a powerful, emotional and thought provoking story. The story is multi-dimensional on so many levels, that I struggled to have a break or notice my surroundings. I was so immersed in the story I even forgot to get off at my train station. Yes, I realized I missed my station after a few stops…
I don’t know whose element was more powerful, Matt’s or Vedie’s because both of them made me feel all choked up. These two beautiful souls with awful histories captivated my heart and I suffered with them and felt happy with them throughout the story right up till the last page.