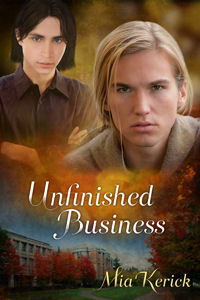 Sequel to Beggars and Choosers

After struggling through dishonesty, betrayal, and the kind of pasts they’d like to leave behind them, Brett Taylor and Cory Butana are back together and starting to build a new life. Brett has a good job. Cory has started college. But not everything goes the way they planned.

Still recovering from the emotional and physical repercussions of a brutal assault, Cory finds himself trapped by his own insecurity and fear, unable to believe that his heart is safe with Brett or that his body is safe without him. On the other hand, Brett has total faith in Cory’s love and commitment, even though he still struggles with his own ghosts.

With girls flocking to Brett’s side and a wannabe-lover lab partner feeding his doubts, Cory can’t find a way to tell Brett about the unfinished business that haunts him. If Brett wants to save him, he’ll have to see through Cory’s deception in time.

My biggest overall impression of this book was that I loved how it focused so much on the relationship. And it did so without stalling out, getting sappy, or involving over-the-top emotional drama. It is a story about two young men discovering their own separate strengths while cementing their bond.

These boys are survivors. They have been through so much, both together and individually. The maturing that occurs for both as they enter into this adult stage of life is very fulfilling for those who have taken the journey from their first meeting as young adults to the happiness they achieve as adults. It’s not without its bumps but their love and commitment to each other is a sweet and beautiful thing to see.

For those sensitive souls I must warn you: this story deals with assault and the effects and recovery of being assaulted. It plays a part throughout the book and while there are many other themes, it is a thread that weaves through the daily lives of these sweet boys. Both young men had hard childhoods and dealt with different kinds of abuse. I felt it was told well and was an integral part of both the characters and storyline.

Unfinished Business was a beautiful sequel to Mia Kerick’s Beggars and Choosers. Cory and Brett are back and there was a lot of beautiful moments in this book. I enjoyed reading this and am being bold in saying it was better than the first book. Mia Kerick has done a wonderful job with this story and I was so glad we got the sequel.

It isn’t very often that I read a book and I fall madly in love with a character, but Brett stole my heart with his incredible love for Cory. Cory and Brett have already been through hell together in Beggars and Choosers and in this story they are starting their new life together…

Mia Kerick has written a wonderful story of true love, haunting danger and trying to protect those you love, while adding in finding confidence in yourself and trusting those you love…

I recommend this to those who love destroying the monsters of the past, unwavering love, wonderful lovemaking, two men who are made for each other, new friends, danger, fear, happiness and forgiveness and a very lovely happy ending.

Beautiful sequel…I really love these guys. It was a great read.

I glanced around at all of the preppy coeds, accompanied by their equally preppy siblings and, if possible, even preppier parents. (Let me tell you, that added up to one heck of a lot of Madras and seersucker, and there was no shortage of those little ponies in the vicinity, either.) Clearly, it was an inherited gene, one that had completely bypassed my family tree. And like a J. Crew fall fashion show, parading up and down the staircase of my new apartment building, they carried floral Lilly Pulitzer garment bags, Lands’ End totes, and groceries from Trader Joe’s, not to mention that what looked like professional moving men cautiously lifted their brand new L.L.Bean furniture.

Now, I could appreciate the simplicity and timelessness of classic preppy décor. Really, I could. But at that particular moment, I didn’t have much time to debate the merits of sailboat striped canvas vs. full-grain, hand-sanded leather couch fabric, as I was perched rather precariously midway up the first flight of stairs, opposite my wild-haired and even wilder-eyed boyfriend, wrestling with a queen-size mattress. And losing. Badly.

Hard to believe that the very same Cory Butana, who had never really belonged anywhere, was moving to live as male partners with his boyfriend of one month (or four years and one month, depending upon how you looked at it) into a tiny studio in the three-story brick apartment building just across the street from the Leighton University campus. Once again, not even slightly typical. And I certainly didn’t give a hoot; I wouldn’t switch places with a single one of those soon-to-be-yuppies who were swarming past me sporting Brooks Brothers chinos.

Just then, the unlikely pair that we must have made, struggling for dominance over a queen-size mattress, caught the eye of a discerning underclassman. The dude stepped out of the doorway of his apartment, hair rather tousled, looking more as if he’d just stepped off a sailboat, and stared down at us in a clear attempt to surmise just exactly how the unpolished bad boy and the unassuming schoolboy fit together as roommates at L.U. But it didn’t take long for the gawker to snap out of his musings, readjust the sweater he wore loosely tied around his popped-up collar, and return his attention to the rolling Ralph Lauren duffel bag waiting for him in the hall, and most probably whom he was going to get to buy beer for him that night.

“Well, dear, the scenery around here certainly deserves a five-star rating.” All right, I was already accustomed to the appreciative glances Brett received from the female student population. But a middle-aged mother had actually just snagged her daughter’s arm and nodded less-than-subtly in Brett’s direction. “If you like that rough-around-the-edges type.”

Her daughter was a very agreeable girl. “Mom, all he really needs is a Kennedy-ish haircut and an IZOD shirt, and he’d be good to go.”

Well, I wasn’t blind; I could admit it: the woman and her acquiescent spawn were correct in their appraisals. Brett Taylor was freaking gorgeous. And when he stopped briefly on the landing to rip off his sweaty T-shirt in a single inelegant stroke, exposing six foot three inches of solid, sculpted male muscle, that cougar nearly dropped her blender.

But neither was I particularly worried. Brett was now, and had always been, completely devoted to me. There was a lot to be said for “unconventional,” I supposed. So now, if all of those middle-aged moms and their pretty daughters would just pick their jaws up off of the dusty floor of the staircase, extricate their eyeballs from my boyfriend’s spectacular pecs, and put one boat-shoed foot in front of another, we could all get on with moving day.

“Hey, kid, yer real quiet up there. This thing ain’t too heavy for ya, is it?” Brett’s sexy drawl rose up from beneath the mattress, a few steps below.

“No, I’ve got it. Just a couple more steps, and I’ll be on the second floor.” I felt the mattress jerk and then practically lift up out of my hands. As usual Brett was overcompensating for my lack of—”Okay, okay, Brett, I’m here!”

The two of us turned the mattress sideways to wedge it down the narrow hallway that led to our apartment. I pushed open the door with my backside and directed our burden to the center of the floor.

“Well, that’s everything from the truck, baby.” Brett tipped the mattress until it dropped down on the floor. Then we flopped down on it flat on our backs, our chests heaving from exertion. Grabbing my sweaty palm with his own and squeezing, Brett turned on his side to focus his green eyes on me. “Welcome home, kid.”

I squeezed right back. “I’m starving. How about we order a couple of pizzas to celebrate?”

“Sure thing. I wonder if they make a decent Greek pie anywhere ’round here?”

One thought on “Unfinished Business”